The winning projects are focused on energy saving, recycling coffee waste, a piezoelectric system and the atmospheric environment.

In addition to the four winners, the panel also decided to award two special mentions.

Today, the Luis Buñuel and Reyes Católicos (Zaragoza), and San Agustín (Calahorra) schools were recognised for their projects to improve energy efficiency, which they created in the classroom. The IES María de Molina (Madrid) and the Colegio La Anunciata (Zaragoza) also received special mentions from the panel. The awards were handed out in Madrid today, as part of the I Efigy Technology Congress held by the Naturgy Foundation. It is an educational event that was attended by over 270 people.

This educational activity from the Naturgy Foundation was launched in January and aims to encourage and raise awareness and interest in energy, strengthen the research ability of young people and inspire curiosity and creativity, while developing teamwork and communication skills. 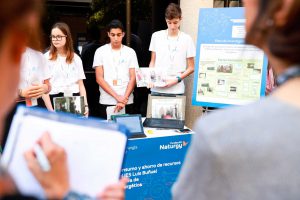 The IES San Agustín in La Rioja was recognised twice; as the ‘Most Innovative’ project by Coffee Energy and as ‘Best Communicated’ project by Piezostep. The ‘Most Feasible’ plan was awarded for the ‘Study of the consumption and saving of resources and energy’ from the IES Luis Buñuel in Zaragoza. The IES Reyes Católicos in Zaragoza was recognised as the ‘Most Engaged Educational Centre’.

After the final 15 projects were defended by the students this morning, the panel of experts selected the winners for each of these four categories. The panel is composed of the managing director of FECYT, Paloma Domingo, the head of the Environment and Sustainability at Naturgy, Nieves Cifuentes, and the coordinator of the STEMadrid Plan from the Department of Education and Research in the Regional Government of Madrid, Silvia Pérez-Cuadrado.

María Eugenia Coronado, Managing Director of the Naturgy Foundation, urged the students “to efficiently and responsibly consume energy and to be passionate about everything related to energy, technology and the environment because many future professions will be within this key sector, which influences the lives of people and our planet.

Meanwhile, Rafael van Grieken, the Councillor of Education and Research for the Regional Government of Madrid, highlighted the success of the STEMadrid Plan, which clearly “corresponds with this initiative from the Naturgy Foundation to promote the science professions. Technology will affect all professions in the future.” With regard to Efigy, the councillor in the Regional Government of Madrid noted the teaching of energy efficiency, raising awareness for preserving the planet and the communication of the projects created by the secondary school students.

The Naturgy Foundation’s Efigy project is supported by the Spanish Foundation for Science and Technology (FECYT). In particular, the Managing Director, Paloma Domingo, placed value on initiatives that promote science and technology professions. FECYT is interested in the project because it is focused on “encouraging technology professions from a young age and includes the schools and the teachers, which is in line with one of the FECYT’s objectives,” said Domingo. She continued: “It is essential to work with the educational community from a non-formal education perspective to support the work of the school and the training of teachers.”

Coronado, van Grieken and Domingo were responsible for handing out the awards to the winners, alongside Eva Buch, the Director of Education, Dissemination and Heritage at the Naturgy Foundation.

The event was closed by Luis de Quevedo, director and presenter of educational science television programmes, who gave an inspirational speech to help the students at the event better understand and value a focus on the STEM disciplines (Science, Technology, Engineering and Mathematics).

In January, the Naturgy Foundation launched this educational initiative aimed at 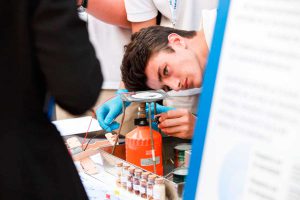 14 to 16-year-old students across Spain.

During this edition, the students were tasked with searching for real solutions to contribute to improving the planet, based on the following themes: science and technology relating to energy, energy efficiency, energy mix and sources of energy, sustainability and air quality.

A total of 59 groups of students from 15 Spanish schools were chosen to take part in the first edition of Efigy. During these months of competition the students and teachers received advice from specialised educators from the Naturgy Foundation and also educational material to make progress with their research for the competition.