The Naturgy Foundation gathers an extensive collection of pieces relating to the patrimony of energy. In particular, it is formed of representative elements in the world of gas, electricity, and the creation and generation of these energies. The compendium of pieces was started in 1977, the date on which the permanent exhibition open to the public in the energy company’s socio-historical site located on Calle de Puerta del Ángel in Barcelona, was unveiled.

Varied collection
Witness to the industrial past and Spain’s technological innovation in the energy sector.

Original objects
They tell a story about the transformation experienced during the late 19th and early 20th century.

The collection of objects is very varied and serves as a witness to the industrial past and Spain’s technological innovation in the energy sector. The protected original objects explain the historical period from the late 19th century and the early 20th century, when a society saw the world they knew change drastically.

At the end of the 19th century, when gas lighting started to be used in the streets, lifestyles changed and the agricultural cycle formed by sunlight was broken. Therefore, when the first lampposts on the main streets in Barcelona were lit using gas in 1842, they were following the example set by other European cities such as London in 1810 and Paris in 1815. The Collection has several original objects that illustrate this modern era, from old maps that chart the distribution of public street lighting, to the most characteristic lampposts from the time, the rods that were used to light them, and the uniforms and other belongings that the lamplighters used in their daily work to light and extinguish the lampposts when the city hall stated.

Subsequently, when electricity became prominently used for public street lighting, gas started to be used in homes, factories and workshops. This led to new uses and a wide range of equipment and objects that worked with gas, known as gasodomésticosor gas appliances. The Naturgy Foundation Collection has a election of significant items classified by type that assisted domestic and industrial tasks at the time and provided society with more convenience and modernity. The notable gas appliances that have been preserved include lamps, cookers, curling tongs, water heaters, stoves, meters, and irons.

If you want to know more about the Collection of the Naturgy Foundation, we explain the history that hides a prominent piece.

Find out the collection of gas appliances from the Naturgy Foundation. 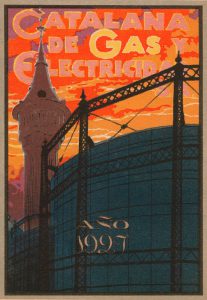 After Gas Natural merged with Unión Fenosa in 2010, a large number of objects related to power generation were added to the collection. The most notable of these include a selection of measuring devices such as voltmeters, ammeters, gauges and meters, as well as a range of different models of light bulb and other materials connected to the electricity sector.

The company employed the best creative minds from each period to launch promotional campaigns that explained and published the advantages of the new energy and its uses. The Collection includes paintings and graphics that depict the industrial and business activity, as well as the convenience provided by the new energy. This section includes works by artists such as Lola Anglada, Joan Junceda, Cesc y J. Segrelles who created illustrations that showed how the introduction of gas was used for the company’s advertising and educational campaigns; the edited images by filmmaker Ramon de Bañosthat provide photographic material of the former embellished and idealised gas factories; and campaigns created by designers such as Norberto Chaves e Yves Zimmermann, who graphically depicted the values of a growing energy market, with a focus on modernity and leadership.

Finally, the Collection includes a small number of current objects that help understand the present and future of energy, transmitting the importance of energy efficiency and the development of technology to improve air quality and for the sustainability of the planet. It is also worth mentioning that this section includes a motorbike run on electric batteries, several wind turbine prototypes and electric turbines.